VinylPlus partners with the sporting community

Sports play a key role in ensuring social wellbeing and in spreading positive values such as education, fairness and gender equality. At the same time, sustainable development, climate change and the circular economy are increasingly becoming key priorities for sporting events. As part of our commitment to sustainability awareness, VinylPlus has been involved with the sports community since 2019. We are engaging with European youth to demonstrate how to reduce the environmental impact of sporting events using materials such as PVC that can be reused and recycled.

In March 2019, VinylPlus championed the sustainable use of PVC at the running event She Runs – Active Girls’ Lead 2019, which attracted 2,500 young women from 35 countries. Organised in Paris, France, by the International School Sport Federation (ISF), the event aimed to promote girls’ health, emancipation, and leadership through school sport. Through the VinylPlus stand in the She Runs sports village, the team explained the sustainable use of PVC at sporting events to the young women participating in the event.

The joint ‘Environmental Action’ commitment signed by VinylPlus and ISF for the She Runs event ensured that PVC was used sustainably during and after the event and that the lessons learned could be shared. A report, Introducing Material Circularity to an International Youth Sports Event, co-signed by VinylPlus and ISF, was officially presented at the She Runs – Active Girls’ Lead conference organised in Brussels during the European Week of Sport in September 2019. The report was presented to key stakeholders from the European institutions, international and European sports organisations and the city of Brussels, as well as to experts on gender equality in sport and international athletes.

All the PVC products used at the event were provided by VinylPlus’ partners: Gerflor; Novafloor; Simona; Serge Ferrari; A. Kolckmann, Renolit and Dickson. They were reused or recycled after the event.

She Runs 2022: Plastic reuse in action

On 14 September VinylPlus participated in ISF She Runs – Active Girls’ Lead, supporting women empowerment and leadership for girls through sport and education. The international event welcomed over 300 girls from more than 20 countries aged 13 to 18 and more than 2000 Brussels’ girls. VinylPlus supported the 2nd edition of She Runs to highlight the key role of PVC in sports as a versatile and reusable material.

Many applications of the Sport Village were made of PVC: its durability, strength, and resistance to weather condition makes it a great material for sport equipment and gear.

VinylPlus renewed its partnership with Belgium Yoga Day, the 2021 edition of which was held on 20 June. The event, livestreamed by Belgian television channel RTL TVI, took place for a restricted group of people in the park of the Pairi Daiza zoo and botanical garden in southern Belgium. VinylPlus provided PVC yoga mats for the event, which were donated afterwards to hospitals and youth associations.

VinylPlus was a main partner of the Brussels Yoga Day 2020 held on 21 June. The day is the official International Day of Yoga established by the United Nations, and yoga sessions are organised every year in 177 countries worldwide.

Due to the COVID-19 pandemic, the well-known event, organised every year in Brussels since 2012 by the association Vidonne, went virtual. This format was in line with the theme set by the United Nations for 2020, Yoga for Health – Yoga at Home. The session, which took place under the Atomium with a restricted number of people, was livestreamed by RTL TVI (a French-language Belgian television channel) on its online platform RTL Play. It was followed by over 250,000 viewers.

After the Yoga Day, the PVC yoga mats provided by VinylPlus for the event were donated to hospitals for their rehabilitation programmes and to youth and citizens associations.

The European Week of Sport – Sport for All, No Borders No Limits

In September 2019, VinylPlus was also involved in the European Week of Sport, the largest publicly-funded sports initiative in the world. In collaboration with the non-profit citizenship association Schuman Square, VinylPlus was present for one week at the Schuman roundabout, in the heart of Brussels’ European Institutions district, for the campaign Sport for All, No Borders No Limits.

For VinylPlus, the event was an opportunity to highlight the sustainable use of PVC in sports, as well as its reuse and recyclability. A range of sporting activities took place there, including yoga, martial arts, traditional Scottish highland games and chess. VinylPlus provided yoga mats for the yoga classes (organised in collaboration with Vidonne – Brussels Yoga Day, with the support of the Indian Embassy), and high-performance PVC flooring, which contains 32% recycled PVC.  The Schuman Square association plans to reuse the flooring at future events, while the yoga mats were donated to local hospitals for use in their rehabilitation programmes. 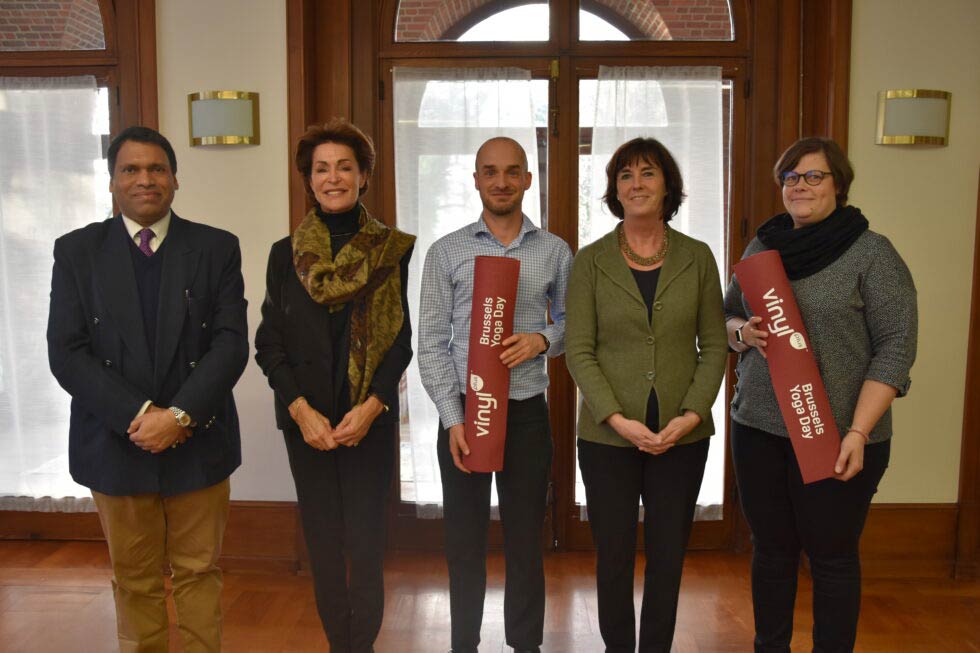